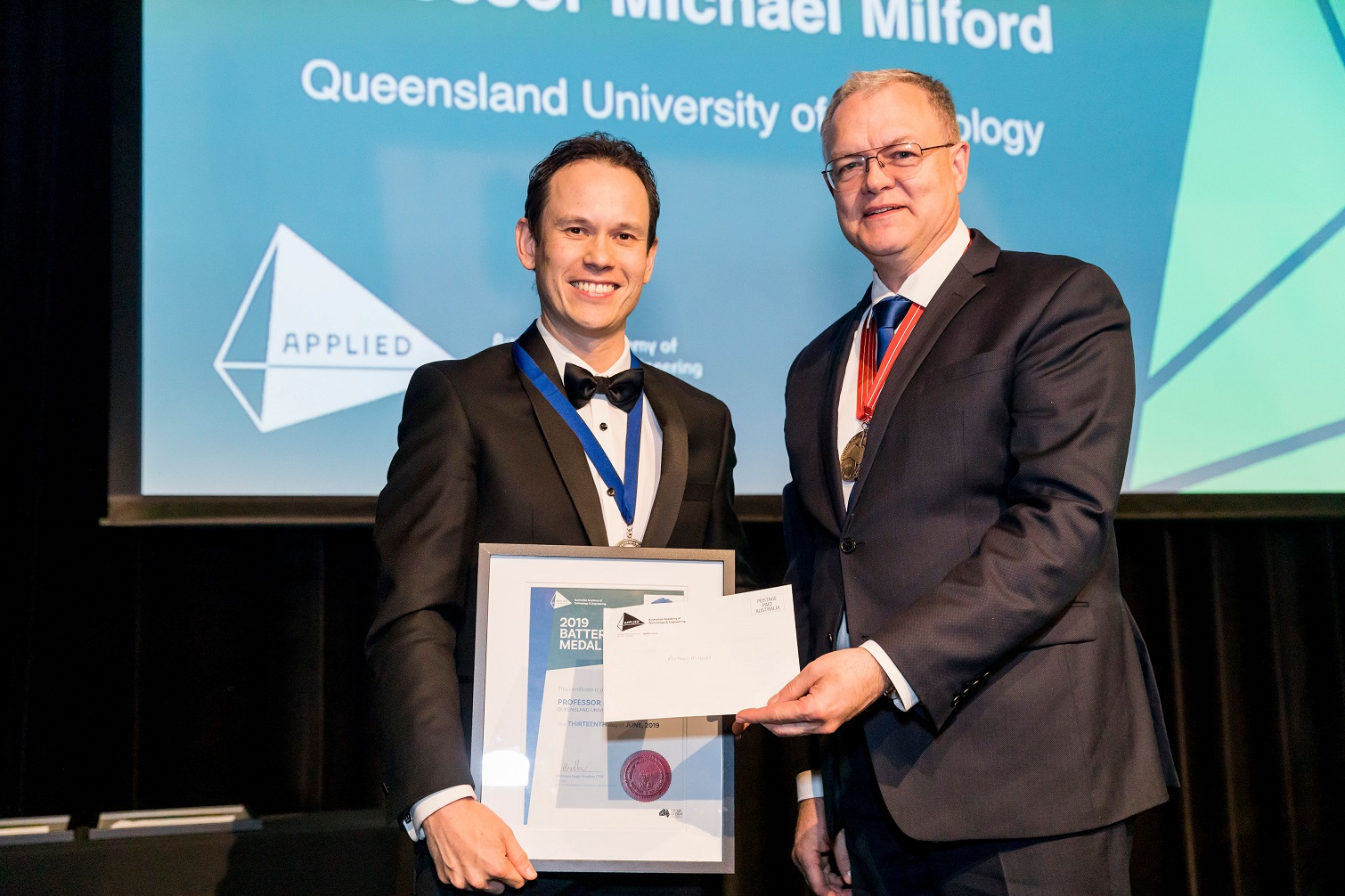 The Batterham Medal is an early career award for a graduate engineer who has achieved substantial peer/industry recognition for their work in the past five years. The award consists of a medal and a cash prize of $5000 sponsored by the Group of Eight Deans of Engineering and Associates.

The Australian Academy of Technology and Engineering administers the award, and the Medal will be presented at the Innovation and Excellence Awards dinner on 11 June 2020 in Melbourne.

Nomination dates have been extended due to changing circumstances. Nominations are now open and close 9am AEST Thursday 16 April 2020.

The Awardee will have:

Guidelines for the Batterham Medal 2020

Nomination Form for the Batterham Medal 2020

Referee Report for the Batterham Medal 2020

Professor Milford’s pioneering transdisciplinary research spans biology, neuroscience, robotics, machine learning and computer vision to create new technologies for autonomous vehicles and robotics. His team has achieved world-first advancements in translating abstract neuroscience concepts and theories into rugged technology that is being trialled in real-world commercial applications. Professor Milford’s internationally renowned contributions to his field of engineering have resulted in major research and industry funding, many prestigious international and national awards, and high-profile collaborations and projects with end-users including Caterpillar, the US Air Force, the Queensland Government, Google Deepmind and NASA’s Jet Propulsion Laboratory.

Just eight years after completing her PhD, Associate Professor Madhu Bhaskaran is pioneering research in oxide-based flexible electronics – stretchy, unbreakable, transparent electronic devices. She developed a transfer process to make these devices functional, combining brittle oxide materials (like those making up a smartphone touchscreen) with soft, pliable silicone rubber. Potential applications abound in optics research, as well as use as gas sensors to pick up pollutants and as patches to track UV exposure.

Professor Birbilis has had an impressive career to date. Then 39, he is a professor, the Head of Materials Science and Engineering and is the Woodside Innovation Chair at Monash University. He is an internationally recognised expert in corrosion, durability management and the behaviour of metallic elements.

Andrew Fleming is Associate Professor of Electrical Engineering at the University of Newcastle, where he graduated with a PhD in 2004. He has made an outstanding contribution to the science and engineering of nanoscale imaging and fabrication systems. A recognised expert in the modelling, control and engineering of ultra-high-precision imaging and fabrication systems, Associate Professor Fleming has consulted on some of the world’s most ambitious scientific and industrial projects for NASA, The National Accelerator Laboratory, The Lawrence Berkeley Laboratory, Boeing, Stanford University, Nikon Research, and the Defence Science and Technology Group in Australia.

Dr Blackhall is founder and Chief Technology Officer of Reposit Power, a technology company designing advanced control systems for grid-deployed energy storage in the ACT. As CTO, he has pioneered the use of distributed control schemes to manage, control and optimise the performance of distributed energy storage systems. The control system he has developed not only optimises the storage and shifting of excess solar generation but, in a world first, allows the trading of distributed stored energy directly with energy utilities and the broader energy market.