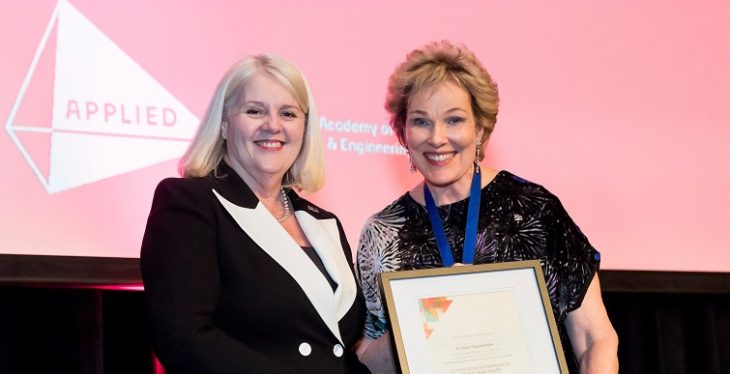 The Minister for Industry, Science and Technology, Karen Andrews, congratulates Dr Jane Oppenheim, winner of the 2019 Clunies Ross Entrepreneur of the Year Award.

The winners of the 2019 Clunies Ross Awards were honoured at a gala event in Sydney on 13 June.

They were congratulated by the Minister for Industry, Science and Technology, Karen Andrews, who delivered the Welcome Address.

The Clunies Ross Awards have been offered since 1991, recognising people who have shared their vision and knowledge to apply technology for the benefit of Australia.

Professor Anthony Weiss’s innovative work on tropoelastin and elastin – the unique biological ingredients that give human tissue its elasticity – led to his invention and subsequent commercialisation of a polymer biomaterial – a kind of synthetic skin – for the treatment of scars and the repair of wounds.

The Australian spin-out company he founded, Elastagen, was acquired by Allergan, one of the world’s 20 largest biopharmaceutical companies, in one of the largest transactions ever  completed in the Australian life science sector.

The large trade sale of Elastagen will bring direct financial benefit to Australia, delivering tax revenue to the government and returning a substantial portion of the USD$260 million proceeds to Australian superannuation funds and venture capital firms that took the risk of investing in early-stage technology commercialisation.

This will have a multiplier effect, increasing confidence among venture capital firms, funds and venture-capital backed companies in investing in the next generation of life science technologies.

This success story is also a win for government policy. For many years federal and state governments have been attempting to increase Australia’s capacity for commercialising innovation through university-industry partnerships. The joint endeavours of Professor Weiss and Elastagen are an exemplar to the world of what our research and biotechnology sectors can achieve.

Their success story has been used by Austrade to encourage overseas investment, by the Department of Industry, Innovation and Science as a case study, and by the NSW Ministry of Health to promote the success of its Medical Devices Fund, which helped fund the work.

Within Australia the story has helped educate the public about the tangible benefits of scientific research, and, incidentally, government investment in it. Professor Weiss has given scores of interviews and featured in hundreds of national and regional media stories, including in every major TV, radio and newspaper outlet.

Public awareness of his scientific achievements received a substantial boost earlier this year when he was made a Member of the Order of Australia.

Professor Weiss was unfortunately unable to attend the event due to illness. He was represented on the night by one of his PhD students, Richard Wang.

The development and commercialisation of photoluminescence imaging by Professor Thorsten Trupke and Adjunct Associate Professor Robert Bardos is a significant milestone for the photovoltaics research community and the solar cell/module manufacturing industry, both in Australia and globally.

Their development of technology that can accurately characterise cells and modules – within the manufacturing line and in fractions of a second – is regarded as a gamechanger.

Protected by more than 40 patents, photoluminescence imaging technology from BT imaging Pty Ltd has been adopted by all Tier 1 manufacturers (and virtually all leading manufacturers of solar panels) globally, including the world’s five largest module manufacturers.

The use of the technology lifts the quality of product, lowers cost and makes proliferation of renewable energy easier.

Their innovation in conception and design, and their advancement of photovoltaic characterisation technology to the point where it can simply be plugged into current photovoltaic manufacturing infrastructure, clearly demonstrates the research excellence, dogged dedicated and industry-ready thinking that defines the very best of engineering achievements.

The innovation developed by Professor Trupke and Adjunct Associate Professor Bardos has had a global impact on the photovoltaic sector, directly enabling reduced manufacturing costs and therefore increasing total use.

As the world enters a time in which renewable sources of energy will move from desirable to critical, photovoltaics will play a leading role in this revolution.

Australia is an established leader in photovoltaic research that, over many years, has resulted in step-change advancements in solar capability and efficiency, as well as cost-effectiveness in manufacturing. The technological advancements in characterisation achieved by them represent the future of Australia’s continued dominance in this arena.

Dr Jane Oppenheim has contributed to driving growth in high-technology manufacturing jobs in Australia by using better science in products and better efficiency in production.

She enables Ego Pharmaceuticals to improve people’s lives through the science of healthy skin with products that are based on strong science. This, in turn, has driven growth in demand from consumers and patients across 24 nations, with a compound average annual growth rate of 12 per cent over 30 years.

To match this growth, Dr Oppenheim has led continuous growth in production capacity in the world-class pharmaceutical manufacturing plant that she runs, with 10 expansions, most including installation of complex new equipment. The current production plant in Braeside, Victoria, is now fully equipped with state-of-the-art high-technology machines.

In 2016, Ego Pharmaceuticals won the Victorian Exporter of the Year award.

Dr Oppenheim is committed to treating and preventing skin problems. Some skin problems may appear minor, but improvements can be life-changing.

For example, QV Skin Lotion used twice daily reduces skin tears in the elderly in aged care homes by up to 51 per cent. In one typical case, 40 per cent of residents experienced skin tears, with the mean cost of treating one skin tear estimated as $488. Reducing skin tears significantly improves lives, while significantly reducing costs of aged care facilities.

The QV Intensive Moisturiser helps improve eczema for children; it in turn reduces their hospital stay and gets them back to school and friends faster.

Dr Oppenheim is now leading Ego’s transformation to industry 4.0 – to have all machines connected, enabling interconnectivity and transparency of reporting.