The scientific evidence for global warming is unequivocal. To avoid the widespread and dangerous impacts of climate change, strong action is required by policy-makers and industry, for it is extremely likely that human influence has been the dominant cause.

Australia’s mitigation and adaptation efforts will be strongly enhanced by the timely adoption and further advancement of technological and scientific innovations, supported by government policy settings that encourage investment in technologies already available.

The Paris Agreement came into force in 2016, with its central aim to strengthen the global response to the threat of climate change. To meet its initial target under the Paris Agreement, Australia has agreed to reduce its greenhouse gas emissions by 26 to 28 per cent below 2005 levels by 2030.

With strong leadership from government and active participation by industry, Australia is well placed to meet the challenges and be a leader in capturing the opportunities in effective climate change mitigation and adaptation.

We have identified four key principles that will help drive Australia’s response to climate change. These require a commitment by industry and government to:

Find out more about our work on climate change. 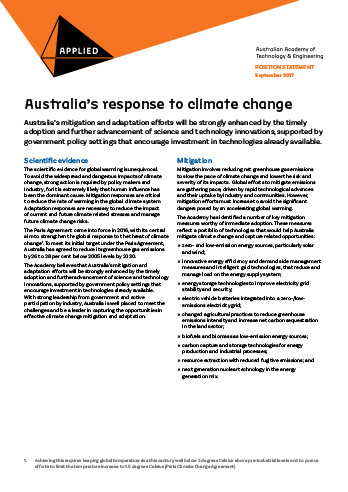 The 2021-22 Federal Budget includes a range of measures relevant to technology, science and engineering. Many measures are also part…