Emissions Targets: Are we on track?

Home > News & Events > Emissions Targets: Are we on track?

The science and lived experience of climate change is becoming increasingly clear, and was brought into sharp relief by Australia’s horror bushfire season of 2019/20. If the world is to avoid the worst effects of dangerous climate change, we must take urgent action to reduce carbon emissions into the atmosphere. Australia has signed up to three separate sets of targets for reducing its emissions.

Following the Rio Earth Summit of 1992, nations from around the world agreed to the principles and mechanisms for action set out in the United Nations Framework Convention on Climate Change (UNFCCC). Under the UNFCCC, the 1997 Kyoto Protocol committed developed nations, including Australia to specific targets to reduce carbon emissions. In 2010, Australia pledged a 2020 target under the UNFCCC Cancun Agreement. In 2016, Australia signed up to the Paris Agreement. The Paris agreement focussed on achieving a new more urgent goal, and accounted for what had happened previously.

Each set of commitments was relevant to the situation at a particular point in time, so it is not possible to draw a straight line from one commitment to the next. The complexity of tracking historic commitments (which are not published in a consistent way, and have been subject to retrospective revision) makes it difficult to delineate a single baseline against which to measure.

This explainer sets out the different commitments and, as much as it is possible to do, takes an independent look at how Australia is tracking against each of them.

WHAT ARE OUR CURRENT TARGETS?

In 2007, Australia became a Party to the Kyoto Protocol. Australia promised that by 2012 it would limit its annual greenhouse gas emissions to no more than 108 per cent of the emissions produced in 1990; equivalent to 592 million tonnes per year.

Australia’s second Kyoto target was updated under the 2010 Cancun Agreement to a new 2020 target based on a trajectory to reduce annual emissions to five per cent below 2000 levels. That is, from 540 million tonnes in 2000 to 513 million tonnes in 2020.

WHAT IS A ‘CARBON BUDGET’?

Emissions reported against this carbon budget are measured on a common basis, known as carbon dioxide equivalents (CO2-e). They include CO2 and other long-lived greenhouse gases such as methane, nitrous oxide and hydrofluorocarbons.

Australia did not use its full carbon budget for the first Kyoto period. Its total emissions for the period were 128 million tonnes below the budget.

The 2013 to 2020 carbon budget under Australia’s Kyoto commitments is shown shaded in grey in Figure 1 below. It is the sum of yearly targets that fall in a straight line, shown in green, from 2010 (the middle of the first commitment period when the target was 108 per cent of 1990 levels) to the 2020 target of five per cent below 2000 levels. The orange line shows Australia’s actual emissions to 2018, while the red line shows the projected emissions for 2019 and 2020. 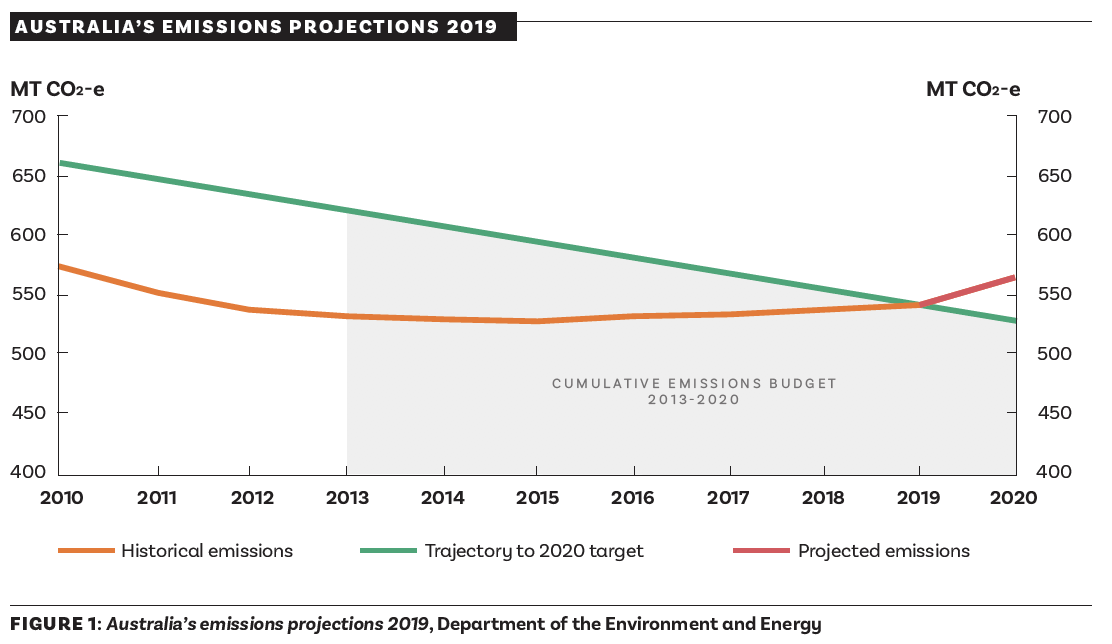 ARE WE MEETING OUR CURRENT COMMITMENTS?

As Figure 1 shows, Australia’s actual emissions were well below the budget line for most of the period. However, in recent years they have started to rise. In 2019 the Department of the Environment and Energy projected that emissions would reach 534 million tonnes in 2020 – barely below the level recorded in 2000. This means Australia is not expected to meet its emissions reduction target in the 2020 year.

The Kyoto Protocol was followed by the Paris Agreement, which Australia signed in 2016. All signatories agreed to work together to ensure the global average temperature would rise no more than 2°C above pre-industrial levels (that is, the levels recorded in the period 1850 to 1900). Signatories also committed to genuinely work to limit the temperature increase to 1.5°C above pre-industrial levels, recognising that this would significantly reduce the risks and impacts of climate change. All nations that signed are required to declare Nationally Determined Contributions (NDCs) to work towards these goals. The NDCs will be revised every five years.

Australia’s first NDC promises that by 2030, Australia will reduce its emissions by between 26 per cent and 28 per cent of the emissions created in 2005. Twenty-six per cent is equivalent to a target of 452 million tonnes emitted in 2030 or a carbon budget of 4,777 million tonnes for the ten-year period 2021 to 2030. This budget is shown as the grey shaded area in Figure 2 below. It is the sum of yearly targets that fall in a straight line, shown in blue, from the 2020 target of five per cent below emissions produced in 2000 to the 2030 target of 26 per cent below 2005 levels. 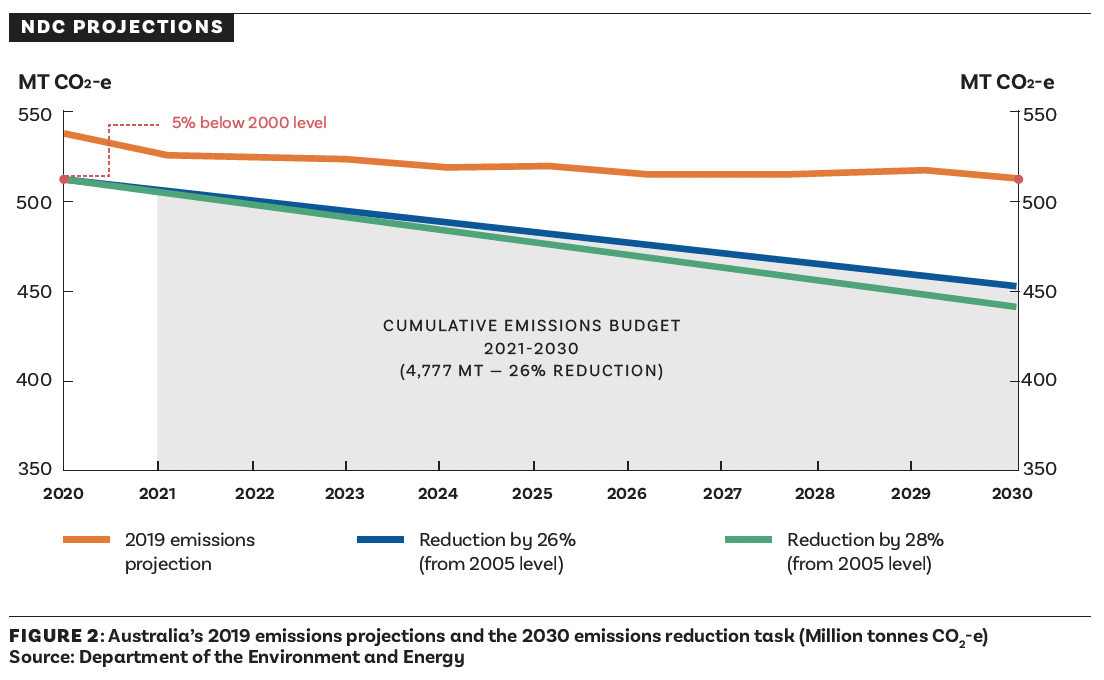 ARE WE ON TRACK TO MEET OUR PARIS COMMITMENTS?

Figure 2 shows the challenge for the Paris Agreement period. According to the 2019 projections, Australia’s emissions in 2030 will be 511 million tonnes, a reduction of only 16 per cent on 2005 levels, compared to a target of 26-28 per cent. While emissions are expected to reduce gradually between2020 and 2030, they will start at a point higher than the 2020 target. Unlike at the start of the Kyoto commitment period, there is an immediate gap to fill. Cumulative emissions for the 10 year period to 2030 are projected to reach 5169 Million tonnes CO2-e; that is, 392 Mt CO2-e above our upper limit.

These projections are based on certain assumptions about Australia’s economic growth and technological advancement. If future circumstances differ from the assumptions, emissions could vary widely from the projections, as shown in Figure 3 below. 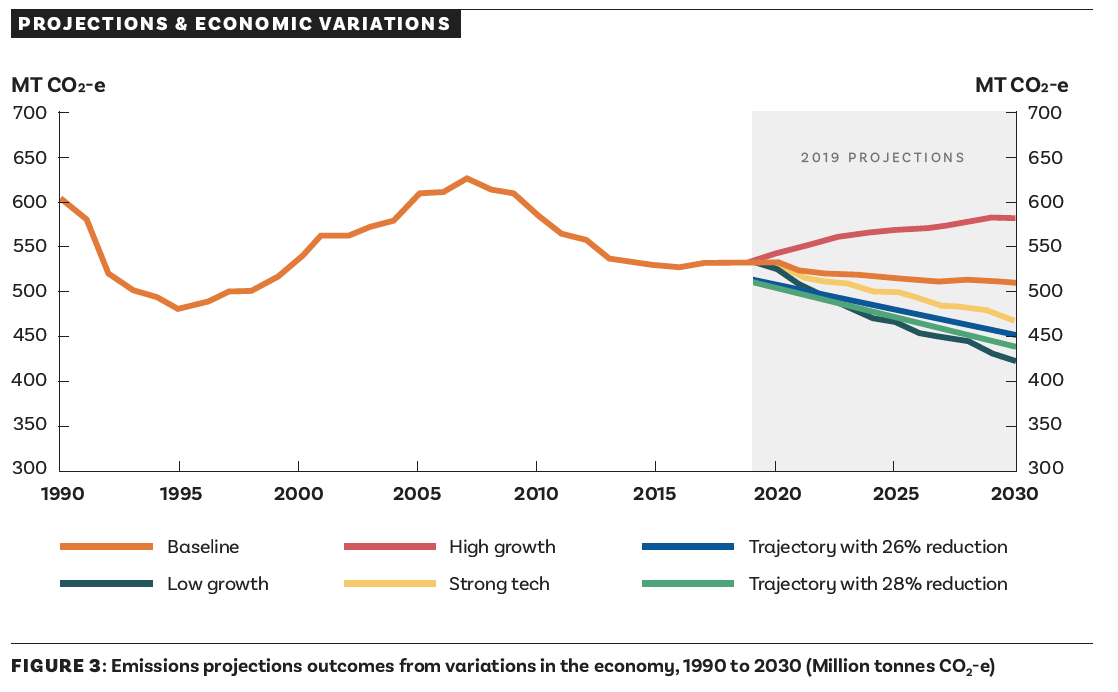 WHAT ABOUT CARRYOVER CREDITS?

To use a mortgage analogy, this is a bit like taking out a mortgage for $1 million, paying it off faster than required to reduce it to $750,000, and then redrawing another $250,000 to pay for renovations; but only expecting to continue paying off the $750,000.

If this approach is accepted, Australia will beat its 2030 target by 16 million tonnes CO2-e.

Most countries oppose the use of carry-over credits because they do not contribute to real reductions in emissions in the Paris commitment period.

The parties to the UNFCCC had planned to meet in Glasgow, Scotland, in November 2020. This has been postponed to 2021 due to COVID-19. It was expected that many of the significant accounting rules and other outstanding matters would be settled at this meeting. It is also likely that the proposed 2025 NDCs will be presented but not committed in Glasgow. The Agreement requires each country to revise its NDC every five years, with the expectation that they will ratchet up each time. Otherwise, the future challenge is much greater than is possible to meet, even with all global commitments combined. The commitments of all signatories at Glasgow and going forward, including Australia, will ultimately need to be sufficient to meet the agreed global goal to achieve net zero emissions by the second half of the 21st century.