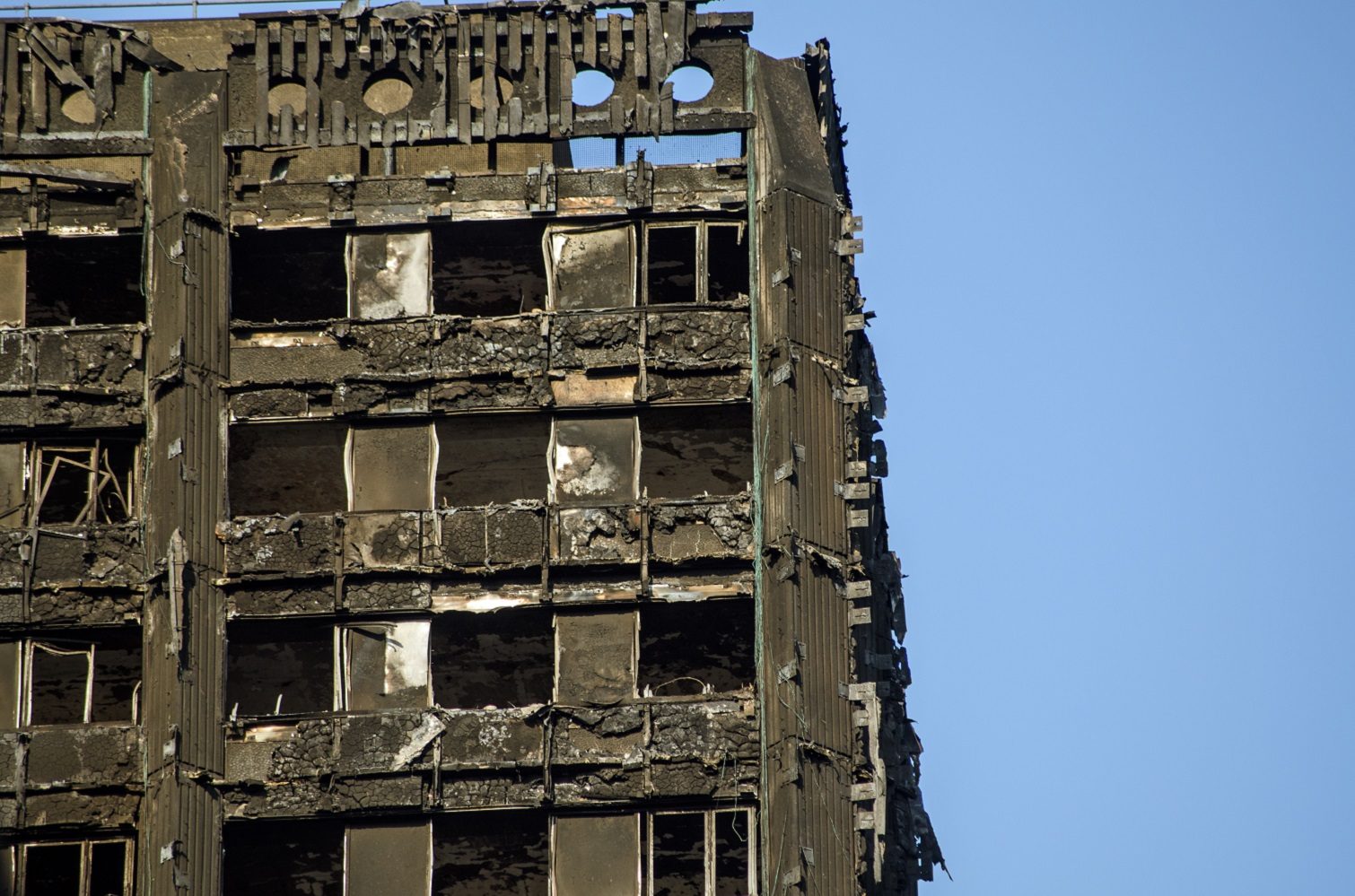 Part of the top floors of the Grenfell Tower block of council flats in which at least 80 people are thought to have been killed following a fire in Kensington, West London.

The tragic fire at Grenfell tower in London sparked the world into action. Now we need fire safety engineers to take the lead.

The fire that spread up the facade of the Lacrosse Building in Melbourne in 2014 accelerated from an eighth-floor balcony to the 21st floor in some 11 minutes. Falling debris ignited two more floors below.

But there were no fatalities or serious injuries and, as a result, this fire failed to generate a great deal of government, regulatory or industry reform in Australia, although there was a Senate Inquiry into non-conforming products, including combustible façade materials.

It took the tragic events in June last year at the Grenfell tower in London with the loss of 71 lives and many injuries to spur the whole world into action.

For me and other fire safety engineers in Australia, the immediate question was, why did the Grenfell tragedy have such a terrible outcome compared to the Lacrosse fire? Or was Lacrosse a major “near-miss” in terms of the potential for significant loss of life for occupants or firefighters?

While not wanting to pre-empt any official inquiries, we can clearly see that, in both cases, the building façade materials appeared to be combustible and contributing to the rapid fire spread.

And we recognised that Lacrosse had some advantages, with two separate staircases, sprinklers and a rapid evacuation plan, although there was risk the building sprinkler system might have been overwhelmed due to the fire spread.

The Grenfell building, on the other hand, had no sprinklers, only one staircase, and planning based on the “Stay Put” philosophy became seriously compromised once non-combustible façade elements had been replaced with combustible materials.

In Australia, post-Grenfell, all State and Territory Governments immediately lifted their efforts and began to try and determine which buildings had combustible façades, the risks, what action was required, and if so, who was going to pay? They’ve started this process, but it’s still very messy, and confusion reigns.

At the same time, many building owners, managers and tenants wanted to know if they were at serious risk in their residential buildings or places of work.

This situation continues to present great challenges to fire safety engineers, certifiers and other practitioners. And there are still great uncertainties for building occupants as the whole industry grapples with varying risk assessments techniques, differing solutions and upgrade costs, and questions of liability.

It took the tragic events in June last year at the Grenfell tower in London with the loss of 71 lives and many injuries to spur the whole world into action.

Governments and professionals also recognise they have to examine the broader and more fundamental regulatory and cultural issues in the design and construction industry.

Failure to prevent the Lacrosse building, Grenfell tower and other similar fires internationally has simply become the trigger for much larger policy concerns.

The report of the Victorian Cladding Taskforce is one example, highlighting serious deficiencies in certification and compliance of external wall construction and other building issues.

But at a more fundamental level, this report also questions the adequacy of the whole building regulatory system in Victoria and the role of the building certifiers, fire safety engineers and other industry practitioners who need better competence.

Our concerns were not only with the quality of buildings and their design, but also with public safety.

In London, esteemed engineer Dame Judith Hackitt led an inquiry into the UK regulatory system and examined building compliance, including matters of fire safety and certification.

Her report, delivered in May, was entitled “Building a Safer Future; Independent Review of Building Regulations and Fire Safety”. She concluded that the key issues were ignorance, lack of clarity of roles and responsibilities, and inadequate regulatory oversight.

These “helped create a cultural issue across the sector, which can be described as a ‘race to the bottom’ because the system does not facilitate good practice”.

She added: “There is insufficient focus on delivering the best quality building possible, in order to ensure that residents are safe, and feel safe.”

Dame Judith sought international comparison on similar building regulatory systems, and ATSE members provided advice on such systems in Australia to the Hackitt Inquiry through colleagues at the Royal Academy of Engineering. She drew significant parallels to problems equally evident in the UK and Australia.

In August 2017, soon after the Grenfell tower fire, the Commonwealth Government through the Building Ministers Forum arranged for a major inquiry to be held.

Our submission put a spotlight on major issues in the built environment, not only regarding fire safety, but also water proofing, indoor air quality, and mould and spores. We offered reasons for failure and potential solutions.

Their charter was to “undertake an assessment of the effectiveness of compliance and enforcement systems for the building and construction industry across Australia”. The resulting Shergold/Weir report of February 2018 generated a total of 24 recommendations.

The report highlighted major concerns with roles and responsibilities, competence of practitioners, education and training, accreditation, and auditing and enforcement of fire safety engineers.

In late 2017 The Warren Centre of Advanced Engineering at the University of Sydney, an independent thought leader that undertakes strong evidence-based research, had initiated early stage planning to deliver a major research project into the need for proper professionalisation of fire safety engineering.

Fire safety engineering plays a critical role in performance-based building design – a fact that had been identified by the Productivity Commission, provided professionals are competent and regulatory systems are robust.

It was opportune, therefore, for members of the Warren Centre fire safety engineering project team, including ATSE members Dick Kell, Jose Torero and myself, to prepare a submission to the Shergold/Weir Inquiry.

Our submission put a spotlight on major issues in the built environment, not only regarding fire safety, but also water proofing, indoor air quality, and mould and spores. We offered reasons for failure and potential solutions.

The submission emphasised that addressing some of the key fire safety concerns emerging from the Inquiry findings would benefit Australian governments, regulators and practitioners.

Members of the Warren Centre team briefed Professor Shergold and Ms Weir, the report and inquiry authors, to reinforce that improving competency in fire safety engineering was at the heart of more resilient buildings and superior infrastructure, and better fire safety outcomes for Australia.

The Warren Centre project for fire safety engineering is now underway, examining the role of the fire safety engineer, required skill levels, the necessary education and training, the most appropriate accreditation system and the audit and enforcement provisions.

A team of world-class researchers and broad industry participants, led by Professor Jose Torero and me as Senior Technical Advisors, are using evidence-based research to examine all of the key issues under three main headings:

A total of eight key tasks and reports will be developed and the first two are already commissioned.

This is a long-held goal of many in the design and construction industry, and the full program is expected to be completed in six months.

The Grenfell, Lacrosse and other serious fires compel us to do everything we can to improve fire safety engineering and raise the quality of buildings and infrastructure to minimise the risk of such future tragedies.

Peter Johnson is an Arup Fellow and former global leader of the fire engineering practice of the international consulting firm of Arup. He has worked in Australia and internationally on the design of buildings and airports, railways, road tunnels and other infrastructure. Peter is a Fellow of the Academy, a Fellow of the Society of Fire Protection Engineers, a Fellow of Engineers Australia, and currently one of the Senior Research Advisors to the Warren Centre Project on Fire Safety Engineering and Professionalism.

Humans have an innate ability to make decisions based on colour. We know when a child is sick from the colour of their face, if a fr…