When the then Premier of Queensland congratulated Mike Ahern on becoming the state’s first technology minister, he answered: “What’s technology?”

“You’ll work it out,” was the Premier’s reply. In the almost four decades since, Michael Ahern AO FTSE has worked tirelessly to make the Sunshine State a brighter place for science and innovation.

“Someone got the idea that we needed a technology minister,” Mr Ahern said, “and they appointed me. I was Primary Industries Minister and I have a degree in agricultural science.” In fact, he was then the only member of the Queensland Cabinet with a tertiary education.

“It was an interesting challenge because there was no department, no offices and no departmental people designated to technology. But I got on with it, and I enjoyed it, and it’s worked.”

Mr Ahern travelled around the world to get a handle on what might be possible in a state with a small population. Then, he set about transforming Queensland into a “technology-based community better equipped to handle the challenges of the future” – a mission he continued as Premier from 1987-1989, and in the private sector to this day.

“It’s not a short-term project to look at the character of an economy, conclude there’s too much dependence on old-style industry like mining, and try to move it to a knowledge and technology base,” Mr Ahern said. 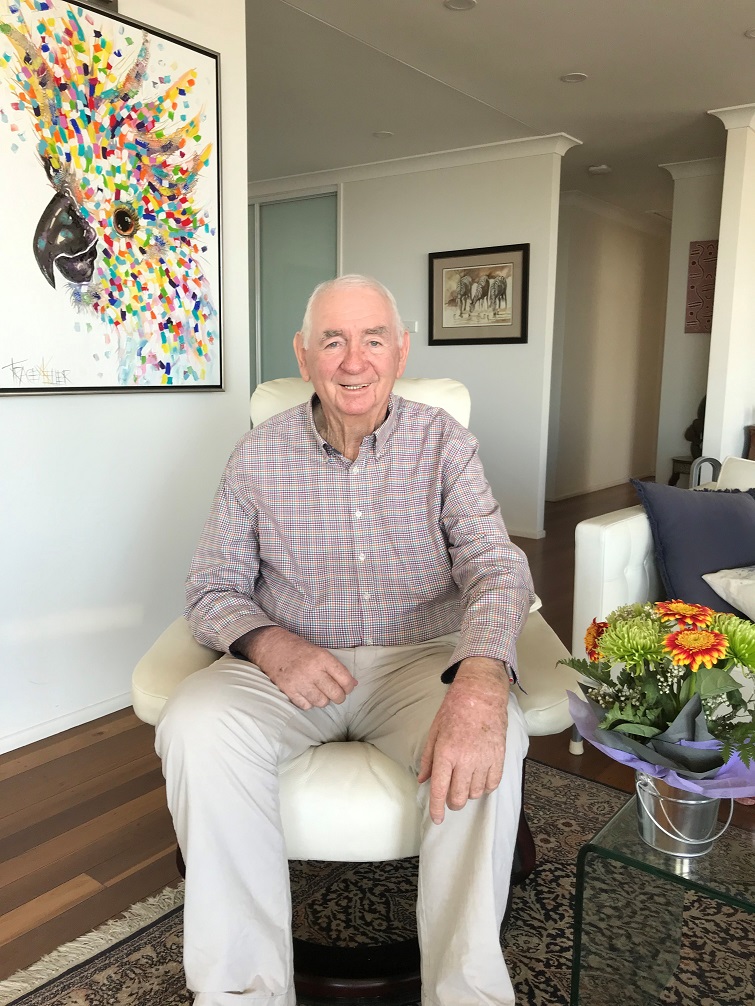 At first, not everyone was on board with the fledgling department’s ambitions. “We were pilloried to begin with,” Mr Ahern said. “We bought a paddock down at Eight Mile Plains on the freeway to the Gold Coast and named it our ‘tech park’.

“The Courier Mail ran a series of cartoons saying how ridiculous that was, because the only things on our tech park were two cows. Today there are 400 companies there, including the biggest employer in Brisbane.”

One of Mr Ahern’s proudest achievements is his championing of health technology. As Premier, he introduced a tobacco tax in Queensland and used the proceeds to fund a new building, the Bancroft Centre, for the QIMR Berghofer Medical Research Institute.

The Institute, located at the Brisbane Royal and Women’s Hospital, has more than 1000 researchers. There is a similar-sized research centre at the Princess Alexandra Hospital.

“We’ve got two of the biggest medical research centres in the world in Brisbane now,” Mr Ahern said. “You can’t build a hospital in this state unless you’ve got a research component in what you do.”

Until recently, Mr Ahern also chaired the Consultative Committee of the Queensland Centre for Advanced Technology (QCAT), a joint venture between CSIRO and the Queensland Government. He fondly remembers its inception – yet another paddock-related success.

“The CSIRO came to me and said ‘We’re cluttered where we are at St Lucia, we need to move out into more spacious surroundings’. So we bought a paddock out at Pullenvale, and today QCAT is still there, with close to 400 researchers.

There's an enthusiasm for innovation that runs up and down the economy, and it's ensuring the future

“Outside of China,” he says proudly, “it’s the biggest mining research centre in the world. Twenty per cent of the people employed in Brisbane are in the mining services sector. It’s not just about getting commodities onto trucks and off again, it’s about adding value to the industries we have.”

Those industries are diverse and Mr Ahern is as excited as ever about the many tech initiatives he’s seen, and helped make, flourish.

“The Centre for Defence Technologies has come to Queensland and transformed the state in many ways,” he said. “The Centre for Virtual Mining in Brisbane is a remarkable place to visit. And the universities have really blossomed. They’re now a very important part of the state’s economy.”

Mr Ahern is also the founder of the Queensland Community Foundation, a $200 million philanthropic trust. One third of the endeavours it supports are medical research-related.
“Of course, I haven’t operated alone. I always had a lot of people that were working with me.”

Mr Ahern was elected a Fellow in 1997 and considers his involvement in the Academy “a real pleasure and an honour.”

He says that the Academy “has had a very strong presence here in Queensland. It provides leadership in our state, and has played pivotal role through its STEM programs. People have sat up and taken a lot of notice of the Academy.

“There’s a vast difference in the character of the state of Queensland from 1968, when I entered the parliament, to today. There’s an enthusiasm for innovation that runs up and down the economy, and it’s ensuring the future.”