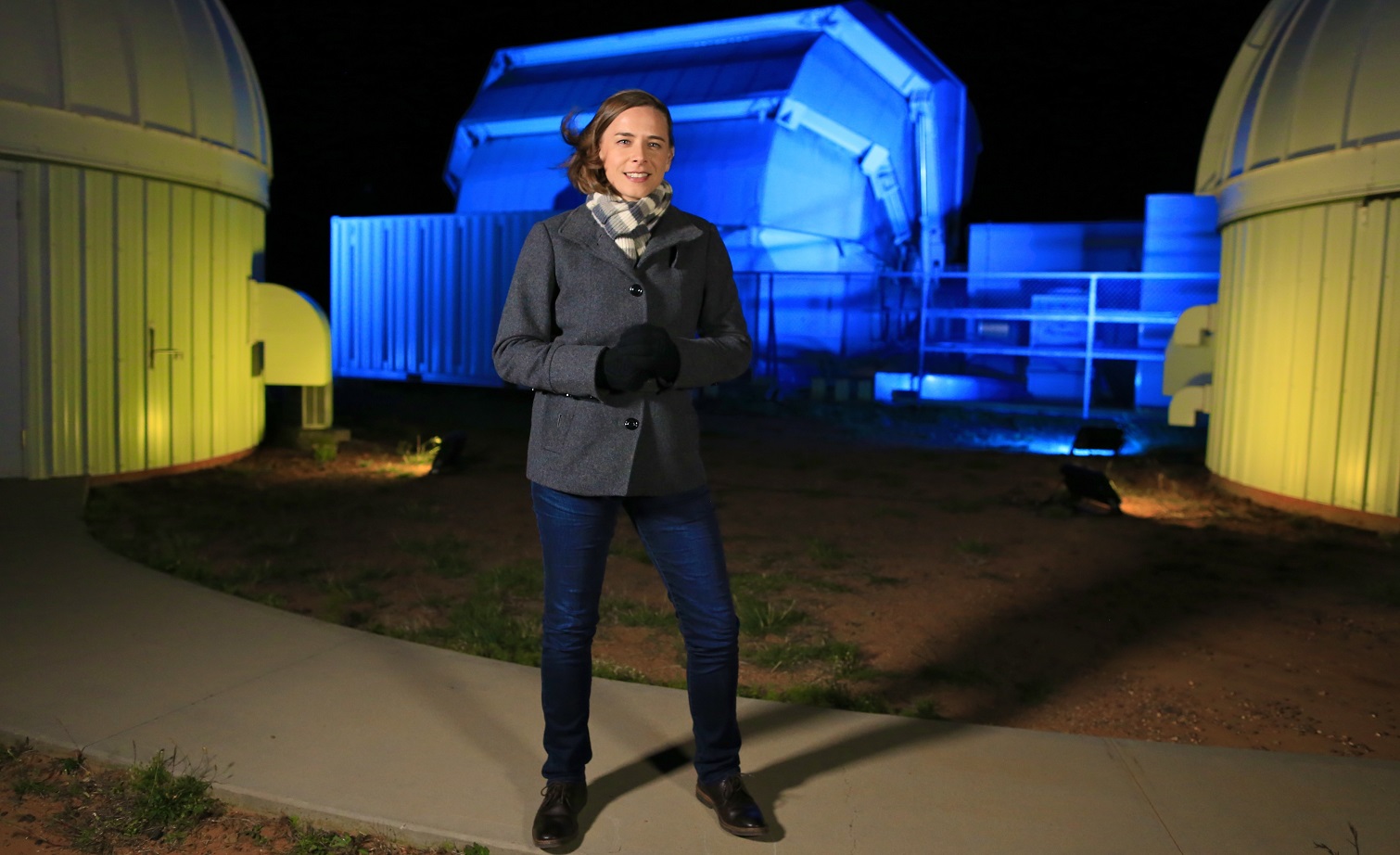 Lisa Harvey-Smith presenting at on ABC’s Stargazing Live in 2017. 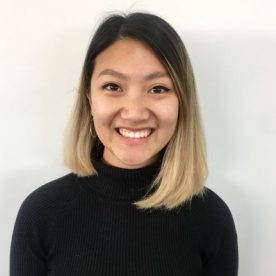 Australia’s first Women in STEM Ambassador discusses the future of astrophysics, the importance of science communication and what it takes to boost STEM diversity.

Not many people have the skill to draw an entire room full of everyday Australians – scientists, science-enthusiasts and the science-illiterate alike – to a two-hour talk on complex astrophysics.

Professor Lisa Harvey-Smith did this in theatres around Australia for the launch of her book When Galaxies Collide and managed to keep the audience on the edge of their seats from start to finish with vivid metaphors and humorous anecdotes of day-to-day life as an award-winning astrophysicist.

This ability to capture and communicate the universe with such vibrancy is among many reasons why she was last year named Australia’s first Women in STEM Ambassador.

In her two-year appointment, Professor Harvey-Smith will focus on accelerating the cultural and systematic changes already underway in Australia to keep women in the STEM workforce.

She said women in STEM were often driven out of science by a lack of work flexibility or a toxic workplace culture. So to boost their numbers, she is tackling gender stereotypes that form at a young age.

Smashing stereotypes herself, Professor Harvey-Smith’s research focuses on an intergalactic event that will change our night sky forever.

Every hour, the Milky Way moves 400,000 kilometres closer to a neighbouring galaxy, Andromeda. In 3.8 billion years, these two galaxies will collide, causing brilliant bursts of star formations, the fusion of supermassive black holes and the ignition of fiery gas streams that will tear through space at almost the speed of light.

But before we worry about that, she explains that in half a billion years, humans will need to think about leaving Earth to get away from our hot, expanding sun.

Do you think humans are more likely to move to another planet or to live on a floating space station once the Earth becomes uninhabitable?

The human body doesn’t do too well in space. Although we’ve grown quite good over the past 20-30 years living in space stations, after a couple of years humans come back weak, with diminished eye sight.

Our bodies have adapted over hundreds and thousands of years to live in gravity, so we’ll have to develop spinning space stations to create artificial gravity – otherwise our bodies will waste away.

Alternatively, when the Earth is too hot we could move to the outer solar system on an icy moon like Saturn’s Enceladus. I think either way, we have some big problems to solve here on Earth today.

We’re destroying our own planet and it’s such an imminent problem. There’s no way we can possibly live on Mars, or another planet or moon, if we can’t control climate on our Earth now.

You’ve played a key role in developing the CSIRO Square Kilometre Array (SKA), which will not only expand our understanding of the universe but also drive technological developments worldwide. What are some examples of these technologies and why is this important?

It’s very exciting working in astronomy because we not only discover things in the universe, but also all of the money spent on space research is also spent for things that help us on Earth – that’s something people need to remember when you hear billions of dollars being spent on astronomy research.

The technologies we take for granted come from the most unexpected types of research that often seem unrelated.

Medical technology and imaging were also developed through fundamental leaps in astronomy and other sciences. Some of the medical technologies used to look at changes in moles to check for melanoma growth stem from astronomy research, for instance.

And the SKA helped developed faster, more reliable wi-fi because of a project at CSIRO to look for exploding black holes.

For the SKA, we’re developing cameras with multiple pixels for radio imaging. In radio astronomy, cameras previously just used one pixel to take images of space, which sounds weird, but it’s true.

We hope that these developments can be translated to medical technologies, for example medical imaging of the body to detect and treat cancers. That could be a very important spin-off.

How and when did you know you wanted to become a science communicator and educator?

It’s really about the way I got into science myself – through some amazing science communicators I grew up with in the UK. My key influencers were television and books.

The BBC had a program called Tomorrow’s World. It imagined the world of the future, but it wasn’t all silver foil, monorails and hovercrafts! It explored how the world can change with technology – that was so inspiring.

I always had this passion to teach but I didn’t want to be a teacher like my mum because, frankly, it’s a very difficult profession. I have the greatest respect for teachers in schools, but I knew it wasn’t for me.

I wanted to use my creativity rather than teach in a confined setting – that’s what I love about science communication, the creative aspect. The challenge of breaking out of my science niche and cutting through the jargon and explain these cool concepts. I find it challenging and engaging and I love watching people’s faces as the penny drops.

How do you think new technologies like machine learning, automation and quantum computing will affect the field of astrophysics over the next 50 years?

Machine learning and the automation of every part of astronomy research is definitely coming – we need it.

We have so much data coming from our new telescopes – going from taking images of just one pixel to multiple pixels and from one telescope to the 130,000 telescopes planned in Western Australia – we will need to use one giant supercomputer brain to study the sky.

Astronomers used to just go through data and images to study space but we can’t do that anymore. There isn’t enough human capacity in the world to do that, so we have to teach computers to be the new scientists.

That’s a very difficult thing to do because humans are surprisingly intelligent compared to computers – computers can only follow specific rules, whereas we have a bit more agency. These new technologies will be massively important and game-changing.

Research will not only be faster, but we will be able to find things we didn’t expect.

Talking to 14-year-olds is actually too late – they’ve already formed a lot of those opinions. Although girls actually outperform boys in many maths and science tests, they have a lower opinion of their ability to do those subjects

When we take a picture of the sky for a whole night using a camera on a telescope, we analyse every millisecond of that picture. Every millisecond the sky changes – there are things flashing and exploding, disappearing and appearing. Those are the flashes of light from a distant universe created by things we’ve not discovered yet.

And those are what bring in the game-changing discoveries. That’s a fundamental shift in the way we do science, because now the computer is alerting us to the things that we don’t expect to see.

Sounds like a great time to be in astrophysics!

What did you wish more people knew about astrophysics?

Astrophysics can be done by anyone.

We have so many citizen science projects where anyone can take part. You can go online and look up Galaxy Zoo, or Citizen Science and you can take part in classifying galaxies, look at how the sky is changing and discover supernovas and star explosions.

And the findings will be used in real research, so I wish people would get involved. It’s really exciting and a great opportunity to be a real scientist in your own home.

My role really is important because it works on a national scale to raise awareness of issues that create roadblocks to girls studying STEM in school at advance levels and progressing into STEM jobs and careers.

Once women are in science, they’re driven out by bad workplace culture and a lack of work flexibility, particularly around the time when they may have caring responsibility. There are many different issues, but really I’m trying to accelerate the cultural change that’s already underway in this country.

In particular, I want to tackle some of the stereotypes that form from a young age and, this year, I’m focusing on early learning facilities. We want young people to understand that STEM is for girls and boys, and it can lead to amazing, exciting, fun, world-changing careers.

I really want to go to primary schools and drive this message home, and work with education departments across the country to help young people make the most of their education.

What have you learnt in this role so far and what do you hope to achieve for the remainder of your time as Ambassador?

I’ve learnt that the education system in Australia is very complex. Targeting young children is really a good way to make change before they start forming stereotypes and before they start making decisions about their future study.

Talking to 14-year-olds is actually too late – they’ve already formed a lot of those opinions. Although girls actually outperform boys in many maths and science tests, they have a lower opinion of their ability to do those subjects.

It’s really about breaking stereotypes, building confidence and boosting the understanding of young women about what STEM really means.