CSIRO and Monash University’s Matthew Hill received the Solomon Award for developing ‘magic crystals’ with dozens of applications from cleaning gases and liquids to mining and drug production.

Cheaper cleaner lithium mining for future cars and batteries is the newest application. It’s being developed with US company Energy Exploration Technologies (EnergyX).

The world is moving rapidly to electric cars and battery storage of renewable energy. That will require 10 to 100 times more lithium than we can produce today.

Matthew Hill has taken a Melbourne invention, metal organic frameworks (MOFs) – sometimes called ‘magic crystals’ – and shown that they can be used to clean air and water, and in all sorts of industrial processes. Now his team at CSIRO (Australia’s national science agency) and Monash University has partnered with US company EnergyX to commercialise a new production process that uses MOFs to create lithium.

Matthew received the inaugural David and Valerie Solomon Award, presented by the Australian Academy of Technology and Engineering (ATSE) on Friday, November 29, at an event in Melbourne. David Solomon was the principal inventor of Australia’s plastic banknotes, and has developed a range of new technologies used widely in the plastics and polymers industries. 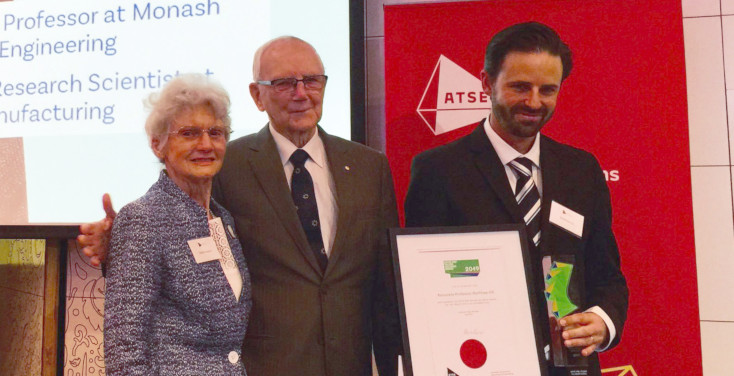 Matthew Hill receiving his award from David and Valerie Solomon.

Most of the world’s lithium is produced from ‘lithium brine’ in a labour-intensive process requiring vast evaporation ponds. One facility in Chile, for example, occupies 42 square kilometres. Matthew’s technology has the potential to replace 4,000 hectares of pools with a filtration unit just 0.1 square kilometres in size.

His ‘magic crystals’ are networks of metal atoms linked and separated by carbon-based (organic) compounds. This results in a massive surface area which can be customised to absorb almost anything. They were first made in the late 1980s by chemist Professor Richard Robson at the University of Melbourne, but were hard to make.

Matthew’s first effort to make a MOF involved mixing the contents of 40 containers to make just one gram of crystals. Today he and his team can make hundreds of kilograms of them each week.

By 2040 it is estimated that there will be 56 million annual electric vehicle (EV) sales and over 1095 gigawatts of battery energy storage systems in the world, an exponential increase on the two million annual and nine gigawatts recorded in 2018.

EnergyX founder and CEO Teague Egan believes that the element will be the single most important and valuable economic commodity for the 21st century.

“The world has never needed these quantities of lithium before, therefore current production methods are not scalable to the magnitude necessary,” he says.

“Matthew’s disruptive technology allows a transformative shift in the way we can now recover this quintessential resource. It will greatly improve the economics and environmental impact of lithium mining.”

“He’s taken an interesting quirk of chemistry and turned it into a patented technology that will underpin new industries,” he says.

“Lithium mining is just the latest in a long line of applications. Matthew and his team are also working with industry to use these crystals to clean natural gas, clean air in submarines, purify pharmaceuticals and much more.”

Matthew notes this is just the tip of the iceberg. “Not only can our MOF membranes separate lithium ions from water so that they can be used to make batteries, we’ve also shown that we can put these membranes inside lithium batteries and improve their lifetime and capacity. And we’re working with a local business, Boron Molecular to scale up manufacturing of our crystals.”

Matthew’s prize includes $20,000 in cash and travel support plus mentoring.