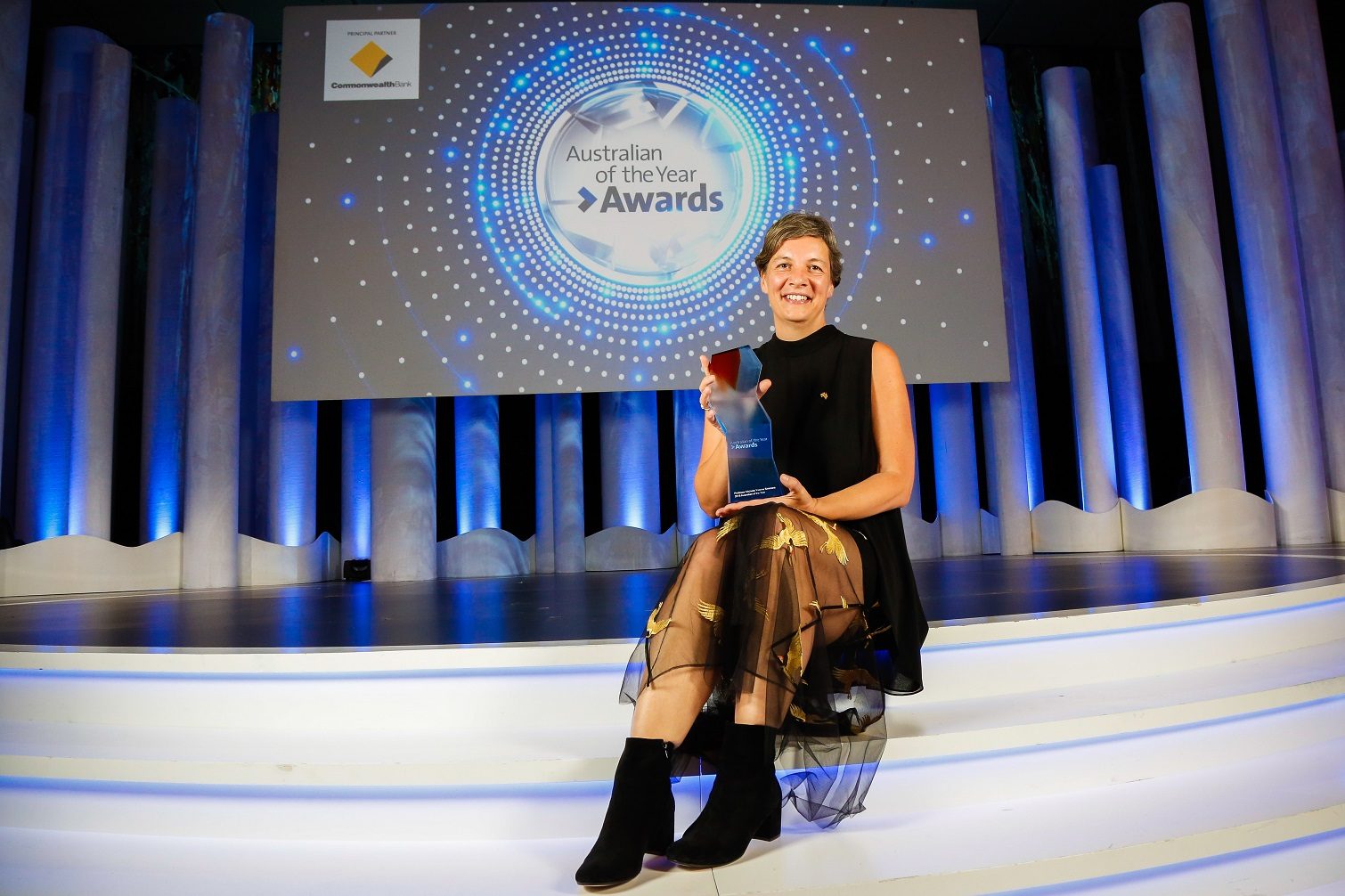 The 2018 Australian of the Year overcame humble beginnings to become a world leader in her field.

When her name was called in the Great Hall of Parliament House in Canberra, UNSW Scientia Professor Michelle Simmons FAA FTSE said she not only felt honoured, but also “charged with a great sense of responsibility”.

But as one of the greatest minds in quantum physics in the world, Professor Simmons is no stranger to responsibility.

In 2017 she launched Australia’s first quantum computing company, Silicon Quantum Computing, uniting representatives of governments, industry and universities in a UNSW-based consortium. She’s also the Director of the Australian Research Council Centre of Excellence for Quantum Computation and Technology (CQC2T).

Her research and drive to understand the world at the quantum scale has pushed Australia to the forefront of quantum computing research globally.

Professor Simmons grew up in London and moved to Australia in 1999, having already garnered an international reputation for her work in two-dimensional gas hole systems.

She graduated from some of the UK’s top universities – her postdoctoral position was in Cambridge. But, as she said in her Australia Day Address, she attended a “pretty rough school” in south-east London.

“Growing up in that part of England, I was not raised within a culture that said: ‘It would be essential to go to university, let alone leave Britain and set up a life at the other end of the Earth’,” she said.

“So, if someone had told me 30 or 40 years ago that I would one day be asked to deliver an Australia Day Address, you can imagine I would never have believed them.”

In 2012, her team developed the world’s smallest transistor, made from a single atom. Every step of their eight-stage plan had been critiqued internationally, but they succeeded nonetheless.

And for Professor Simmons, there’s no greater euphoria than overcoming a challenge.

As a child, Professor Simmons played competitive chess (in fact, she still keeps her certificate from the London Primary Schools Chess Association). Back then, chess was an unusual game for girls. Now, she’s still defying expectations – only 5 to 7 per cent of her field is female.

Group think is everywhere, yet it is the antithesis to scientific endeavour. My prescription in this case is to remember, no matter who you are, it is always important to question the world around you and build your own understanding based on your own efforts.

You are a role model for young scientists who are inspired to pursue STEM education or research. What advice, particularly to young women, can you offer them in developing their career?

Work hard, believe in yourself, and don’t be afraid to go for it. You should certainly avoid the easy options. There are great rewards that come from embracing hard challenges and carving your own path. You might be surprised by what you can achieve!

It also pays to be open-minded about your career. One great thing about a STEM education is that the skills you learn – coding, maths, critical thinking, logic, data analysis, research, the ability to communicate complicated concepts, etc – are all transferrable skills that can open many doors. Undertaking STEM subjects will open rather than narrow your choices in life.

What are some of the challenges you’ve faced getting to this point in your career?

Two of the biggest challenges I have faced are group think and the ever-increasing amount of bureaucracy.

Group think is everywhere, yet it is the antithesis to scientific endeavour. My prescription in this case is to remember, no matter who you are, it is always important to question the world around you and build your own understanding based on your own efforts.

Bureaucracy seems to be inevitable as research efforts grow in size. In this case, however, there is no remedy. You just have to battle through it!

What do you wish more people knew about quantum technologies?

There is a transformational change coming in information technology, as we learn to manipulate and control quantum states. This will impact nearly every industry that is data-intensive via absolutely secure communications and ultra-fast computation.

It will also require a whole new skills base: hardware and software engineers to build the quantum chips and develop quantum programming languages; mathematicians and physicists to work on quantum algorithms; hardware engineers to make control systems; instrument scientists to develop the technologies for exquisitely precise measurements; and material scientists, chemists, and physicists to design new devices.

It is an exciting time for Australia as we have an incredibly strong, indeed disproportionately strong, research base in quantum technologies across all these fields.

You’re developing a computer that could “solve problems in minutes that would otherwise take thousands of years”. What are some examples of these problems?

Effectively, any industry that needs to sort through large databases or optimise problems involving lots of variables will be impacted. It’s a game changer.

What else is in store for the future of quantum computing? What do you imagine the technology would look like in 2030?

By then, I believe we will start to see a proliferation of quantum servers, performing complex calculations for remote users. The model will be reminiscent of that employed for the first servers developed for classical computing, where users submitted a job and awaited the outcome.

Significantly, Australia has the potential to manufacture these servers itself and develop associated communications technology for secure access. These activities could form the foundation of completely new industries.

To what extent do you think Australia is equipped to handle the pace of changing technology?

We also have an adaptable and open-minded industrial sector. However, sometimes our academic and industrial priorities are not aligned. Getting our strong research base and our receptive commercial sector to work together is what will determine whether Australia is to make the most of its opportunities in the quantum domain.

Getting our strong research base and our receptive commercial sector to work together is what will determine whether Australia is to make the most of its opportunities in the quantum domain.

Where do you see Australia placed in 2030 when it comes to technology? Keeping up with or lagging behind the rest of the world?

Our challenge is to translate our strong research base to new industries here in Australia, and this needs to happen quickly if we are to capture the benefits for Australia by 2030. This will require creative thinking and a sense of urgency to break down the barriers between universities, industry and government.

The opportunities are enormous, but the translation of quantum computing technologies into practice is a long-term project. We need to start now.

How will you use this platform as Australian of the Year? Are there any messages you’d like to promote?

First and foremost, I would like to see us break down the boundaries between universities, industry and government in order to help found unique high-technology industries in Australia based on our international leadership and strong research base.

Second, I am passionate about encouraging young girls and boys to enter STEM fields. To this end, I want to highlight the benefits gained from taking the hard subjects in school: disciplines that build strong quantitative skills and encourage the ”creation” rather than just the ”usage”’ of new technologies. This will become increasingly important no matter what career a person aspires to.