Member of the Crawford Fund Board; Chair, Plant Health Australia; and former Chair, Board of Trustees, Bioversity International

Tim Andrew Fischer AC FTSE was an eminent and passionate Australian who touched a great many people from all walks of life. I would like to talk about Tim’s contributions in three areas that have not yet received as much press coverage as maybe they should and where I personally have been involved.

These are the Crawford Fund, the Crop Trust (previously the Global Crop Diversity Trust) and the Country Education Foundation. All three organisations were supported passionately in Tim’s inimical style and each reaped rich rewards for having him onside.

I first came into contact with Tim when he “commanded” me to become the Chairman of the Victorian Committee of the Crawford Fund; who could argue with the Chairman and a former Deputy Prime Minister as well.

So in 2001 I joined the Crawford Fund Board and watched his passion for international agricultural research engulf us all with his knowledge, his wisdom, his expert running of a meeting, and his connections, which were an eye-opener to me who thought I had a fair network of scientists and agriculturalists in Australia and elsewhere.

He was persuaded by the then Crawford Fund CEO, Dr Bob Clements AO FTSE, to convince the Australian Government (and the Grains Research and Development Corporation) to support the fledgling Global Crop Diversity Trust.

Tim’s efforts made Australia, at that time, one of the largest supporters of the Trust and a key and influential country in orchestrating the growth of this new, exciting and incredibly important global organisation to conserve plant genetic resources. This in turn would cement the future of global agriculture and thus global food security.

Tim’s appointment as Ambassador to the Holy See in 2008 was a masterful appointment for many reasons, not least of which was that he was now close to FAO (the UN Food and Agriculture Organisation) and the headquarters of the Trust, and my own Bioversity International (a CGIAR biodiversity research centre which I chaired from 2005 – 2009), both sponsors of the Trust and the soon-to-be-opened Svalbard Global Seed Vault.

During this time I would be in Rome three or four times a year (sometimes even more often) and used to look forward to dinners in and around the Aventino with Tim, our friend Dr Cary Fowler, who was then the Executive Director of the Trust, and often with the Bioversity Director-General.

All the stories you hear about the Vatican Train, Tim’s encyclopaedic memory for train timetables, and his knowledge of history are all true – I have witnessed it all! One evening he was a little late – just been exploring the room at Ostience railway station (specially built for the Hitler visit in 1938) where Hitler and Mussolini mapped out their side of the war. He knew many secrets of many railway stations all over the world.

Tim was Vice-Chair of the Crop Trust from 2013 – 2017 and subsequently chair in 2018. He visited the Svalbard Global Seed Vault in February 2014 to help the Australian contingent deposit Australia’s second tranche of seeds – 15 boxes containing 10,069 samples, including one from his Boree Creek farm. 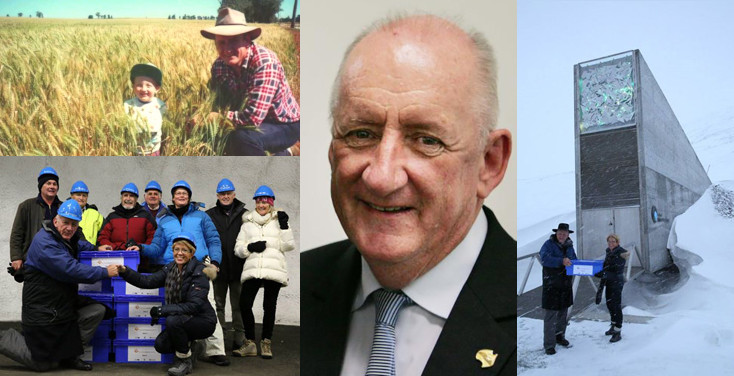 In their tribute to Tim, the Crop Trust Executive Board Chair, Sir Peter Crane said: “Tim was a remarkable leader and unique personality – full of wisdom and also good cheer. The Crop Trust benefitted enormously from his passionate support. We have lost a good and true friend.”

Dr Cary Fowler, Executive Director of the Crop Trust 2005 – 2012, said: “A fascinating, brilliant, eclectic, totally committed, one of a kind dynamo of a man has passed away”; and again on the Crop Trust: “He provided visibility and compelled attention for the Crop Trust and its mission of conserving crop diversity at an early and critical time in the organisation’s history. Tim was not a spectator, and if you engaged with him, you couldn’t be either.”

Last year and closer to home we also shared a memorable Victorian Rural Press Club function in Warracknabeal and Horsham to show the Rome-based Secretary of the International Treaty for Plant Genetic Resources for Food and Agriculture the new genebank in Horsham and to discuss the importance of plant genetic resources and wild relatives to the future of global food security. As usual, Tim was in his element explaining international issues in simple terms so that the lay audience understood perfectly.

I last saw Tim at the May meeting of the Academy’s Victorian Division meeting where I was talking about the future of agriculture and Svalbard. He had called from hospital to say that the doctors wouldn’t let him out of the Peter McCallum. Five minutes into the talk he snuck into the back of the room, listened to the end, made some complimentary remarks and some points of clarification and disappeared back to hospital. The passion and interest was so evident, even though he was clearly not well.

Finally, Tim was Patron of the Country Education Foundation (CEF), based in NSW. This organisation is community-based and helps youth from rural Australia to improve their education and career prospects. Again he “suggested” that I start a CEF in my home town of Warracknabeal, the first in Victoria, which we did. He had agreed to launch our CEF in early July but, understandably, had to withdraw, but he did support our venture with a very generous donation.

A very fine, passionate and generous person whose passing will be a terrible blow to all Australians and especially to his family. I for one will miss him terribly – no more phone calls about the rain, or crops, or an obscure railway branch line near Murtoa, or Mark Twain visiting Horsham!