Australia’s emissions targets — are we on track?

Australia’s emissions targets — are we on track? 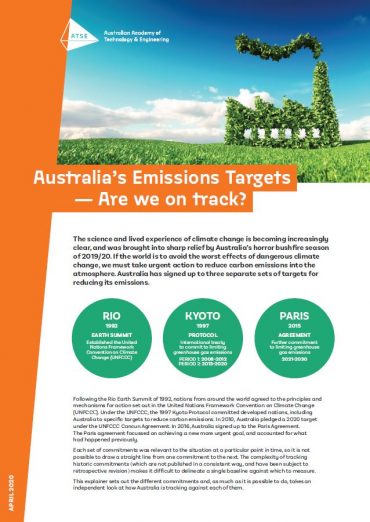 The science and lived reality of human-made climate change are unequivocal.

Australia’s horrific 2019/2020 bushfire season made it clear that the world must take urgent action to stop emitting greenhouse gasses.

So is Australia meeting its international obligations to cut carbon emissions? The Academy has published an “emissions targets explainer” to clarify where we stand.

Australia has signed up to three separate targets, measured from different baselines:

Australia comfortably met its first Kyoto target to increase emissions by no more than eight per cent (for context, the average target for OECD countries was to reduce emissions by five per cent.) We have also stayed within our Kyoto “carbon budget” for most of the measured period.

However, in recent years, Australia’s emissions have actually risen. The Department of the Environment and Energy projected that emissions would reach 534 million tonnes in 2020 – barely below the level recorded in 2000. This means Australia is not expected to meet its emissions reduction target in 2020.

All signatories of the Paris agreement pledged to work together to keep global temperature rise no more than 2°C above pre-industrial levels. The Paris targets pose a significant challenge for Australia, as our emissions currently are, and are projected to remain, well above our Paris “carbon budget”.

The Australian Government has argued that Australia’s cumulative “overachievement” under the Kyoto Protocol should offset any “underachievement” on the 2030 target – these offset reductions are known as “carry-over credits”.

Most countries oppose the use of carry-over credits because they do not contribute to real reductions in emissions in the Paris commitment period.

It is also important to note that none of these targets account for greenhouse gas emissions from Australia’s fossil fuel exports, which are approximately triple our domestic emissions.